From 28th till 29th of March 2011 the Head of the Department of Legal Disciplines Kabzhanov Akylbek Taybulatovich by the invitation of the regional scientific and methodical center “Saryarka Daryny” took part in the annual regional stage of the Republican Olympiad, as a chairman of the jury in the section “Fundamentals of Law”.

The Olympiad was held in two stages. The first was a legal essay competition, the second – testing on the basics of national legislation.
For modern schoolchildren such events in the light of measures taken by struggle for academic honesty in the form of proctoring cause many problems, but nevertheless schoolchildren are trying, gaining experience and I am sure our contestants will cope with the tasks at the Republican stage of the competition with honour!
Good luck, schoolchildren! 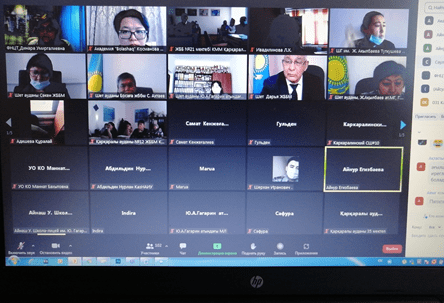 March 03, 2022 as part of career guidance work held a regular online meeting with 11th grade pupils of Karkarala and Shet […]

The regional newspaper “Ortalyq Qazaqstan” has published an article by the Rector of the “Bolashaq” Academy, Professor Menlibayev K.N. with a review […]

In Karaganda region from June 13, 2020 tightening of quarantine measures in connection with growth of coronavirus infection COVID-19 in the region […]