The section was attended by university professors, research institutes’ staff. Some of them were active in discussion of the problematic issues related to the topical problems of legal science and law enforcement practice.

All in all, 41 papers were submitted to the Section “Current Problems of Legal Science and Law Enforcement Practice”, of which 10 were in Kazakh and 31 in Russian. Fifteen papers were prepared by the teaching staff of the “BOLASHAQ” Academy.

The improvement of quality of submitted reports, diversity of topics of scientific researches, increase of professionalism of scientists were noted. Scientific results of the best authors of reports are distinguished with novelty and relevance, and what is especially important – have a serious applied value and in further scientific development. It is also necessary to note the high level of preparatory and ongoing work of the organizers in the sections and the presentation of reports using modern technical means.

The legal system of the Republic of Kazakhstan develops dynamically which is promoted by fixation of conceptual directions of its development at legislative level, planned character of law-making activity, availability of effective legislation regulating law-making activity, account of law enforcement practice during development of new legal norms, and also active application of achievements of legal science.

The topics of the conference materials submitted for discussion are quite varied:

THE LEGAL MECHANISM OF STATE REGULATION OF LABOUR MIGRATION

THE LEGAL NATURE OF OBLIGATIONS

PROBLEMS OF PARLIAMENTARISM INSTITUTE DEVELOPMENT IN THE REPUBLIC OF KAZAKHSTAN

SURVEILLANCE IN THE PROSECUTOR’S ACTIVITY DURING THE SOVIET PERIOD

ON THE SYSTEM OF LAW

LEGISLATION SYSTEM: CONCEPT AND STRUCTURE (BY THE EXAMPLE OF RUSSIAN LEGISLATION)

PHILOSOPHICAL AND LEGAL ANALYSIS OF WAR

TO THE QUESTION OF YOUTH EXTREMISM

ISSUES OF CIVIL RIGHTS PROTECTION IN THE REPUBLIC OF KAZAKHSTAN

SOME LEGISLATIVE CHANGES IN THE FIGHT AGAINST CORRUPTION

THE ESSENCE OF MODERN RUSSIAN FEDERATION

DEVELOPMENT OF NATIONAL LAW IN THE REPUBLIC OF KAZAKHSTAN

CRIMINAL LEGAL POLICY AS A WAY OF FIGHTING CRIME

As part of the implementation and expansion of international cooperation in the field of scientific activities at the conference were presented scientific reports of participants from Russia: N.F. Katanov Khakass State University, Abakan, Russian Federation; St. Petersburg Law Institute (branch) University of the Prosecutor’s Office of the Russian Federation, St. Petersburg, Russian Federation. There were presented for discussion the reports of participants from other universities and institutions of Kazakhstan: Academician E.A. Buketov Karaganda University; “Bolashaq” Academy; Karaganda Economic University of Kazpotrebsoyuz; B.Beisenov Karaganda Academy of MIA of RK; Kokshetau University named after Abai Myrzakhmetov; Kokshetau State University named after A.G. Buketov; Karaganda Economic University of the Republic of Kazakhstan. Abay Myrzakhmetov; Karaganda Evening School No. 100.

The report on “Philosophical-legal analysis of war” of professor Kabzhanov A.T. The report analyzed the philosophical-legal analysis of the armed conflict between Russia and Ukraine. For the sake of objectivity and without taking sides the author conducts philosophical and legal analysis of the ongoing geopolitical conflict in the form of an armed confrontation between the parties. Based on the norms of international humanitarian law and philosophical understanding the author assesses the concepts of “war”, “aggression”, “special military operation” and defines their interdependence. The determinants of armed clashes are analysed. Unwanted disregard for the norms of international humanitarian law is disclosed and peace, as a civilized way of resolving any conflicts, is called for.

Associate Professor M.M. Mukhataev made a presentation on the preceding constitutional reforms. The rapporteur noted that all amendments to the Constitution are interlinked with each other and have a common conceptual logic. Therefore, when discussing individual points, it is important not to miss the big picture as a whole, since the purpose of the constitutional reform is the systemic transformation of the current political model. The participants of the breakout session agreed that the reforms will result in a new, better balance between the branches of power and an effective dialogue between the state and society. It forms the basis for transition to the new model of the state system – the Second Republic.

The senior lecturer Ospanova G.S. in her speech “Strategy of formation of evidences on a scene” noted that a scene has a great informative character and reflection of traces of a crime. Often an investigator marks and states the place of incident. It is recommended to fix them for further proof in criminal proceedings, i.e. to strictly follow the legal rules of evidence collection, use, investigation and evaluation. Professor A.L. Khan gave his expert opinion on electronic digital evidence, giving practical examples.

Also within the framework of the sectional meeting a scientific report of senior teacher Satkenov A. on the topic: “Tactical combination when giving response” was heard. The speech of the young scientist aroused the interest of senior colleagues, who gave their recommendations on the topic.

Decision on the results of the section work:

The Working Group on the section “Actual problems of law science and law practice” of the International Scientific Conference “Science and education in the modern world” developed the following DECISION:

1.         To consider the work of the Section “Actual Problems of Law Science and Law Enforcement Practice” of the International Scientific Conference “Science and Education in the Modern World” as successful, to note a high scientific and organizational level of the event.

2.         To continue the work on further establishment of contacts with institutes of higher education, academic institutes, scientific-research institutes and law-enforcement bodies of the Republic of Kazakhstan.

We recommend to the authors of the papers of the section “Current Problems of Legal Science and Law Enforcement Practice”:

1.         When preparing a scientific paper, take into account that its content should include presentation of own conclusions and interim or final results of their scientific research, experimental or analytical activities.

2.         Scientific article shall have the effect of novelty: the results set forth in it shall not be published earlier, i.e. by publishing a scientific article the author assigns for himself the priority in the chosen field of research.

3.         In a prepared research paper, for better perception of the amount of work carried out and the results of your research activities, present the material in a visual form: make diagrams, charts, graphs, tables. This will not only help you to systematise the information you have obtained, but also help your readers to better understand you and use your material in their professional activities. Tables should have headings and graphical material should have captions. Each such element should be directly linked to the text of the article and a reference to it should be included in the text of the article.

5.         When drafting the title of a research article, remember that the title of the article should serve two purposes: to reflect the content of the article and to attract the interest of readers. As well as the text of the paper itself, the title should be written in a scholarly style and reflect the content of the paper as concretely as possible. It is desirable to include in the title several key words that relate to the essence of the issue. The length of article title should not exceed 10-12 words.

6.         When you start writing a research paper, imagine the person for whom you are writing it. Provide commentary on areas that are difficult or difficult for your audience to understand, but it is important to strike a balance here and not to start explaining elementary and well-known truths. Scientific language uses bookish, neutral vocabulary as well as special terminology. Do not use unfounded borrowings, and those that you need to strengthen your ideas in the form of a quotation with links to the original source.

Chairman of the section Kabzhanov A.T.

M.M. Mukhataev M.M. is responsible for the research work of the department.

On November 12, the regular meeting of the student science group ‘Adilet’ was held on the theme: “On new changes in criminal […]

Due to the spread of the new type of coronavirus in the world, handshakes are being refused in many countries to protect […]

Dear users! Publishing house “АҚНҰР” offers us free access to its resources and offers to print your works. The Publishing House publishes […] 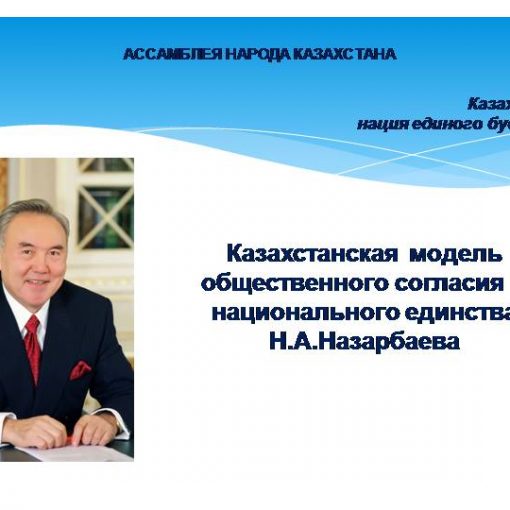