Ivan Kirillovich Pankov was born on June 22, 1925 in the village Karpovka (now within Karlo-Libknechtovsk), Donetsk region. In the family of an employee. He graduated from 8 classes in Artyomovsk. At the beginning of the war he was evacuated with his family to Kazakhstan. He worked at the state farm of Batpak village, Osakarov district, Karaganda region.

Since January 1943 he was drafted into the Red Army and since 1944 at the front. In Semipalatinsk he studied military science, joined the ranks of air paratroopers.
Despite his young age, Ivan Pankov quickly became one of the best shooters in the battalion. He not only skillfully coped with the tasks of eliminating soldiers and officers, but repeatedly came out victorious in duels with enemy snipers. Unfortunately, his sniper score is still unknown.

Especially distinguished the Guards Sergeant Pankov June 21, 1944 at the breakthrough of the enemy’s defense on the Svir River, near the town of Lodeynoe, Leningrad region. As part of a special group he participated in demonstrations with scarecrows to simulate the force of the river to detect the location of enemy fire points.
For the excellent performance of the Guards Sergeant Pankov was awarded the high title Hero of the Soviet Union by the Decree of the Presidium of the Supreme Soviet of the USSR of July 21, 1944. Communist Pankov was also awarded the Order of Lenin, the Order of Patriotic War of I degree, medals.
After the war he graduated from the Officers Advanced Training Courses. Since 1946, Lieutenant I.K. Pankov in stock (due to illness). Since the same year on the leadership of the Komsomol work in Lviv region. In 1949 he graduated from the Higher Party School of the Central Committee of the Communist Party of Ukraine in Donetsk and was sent to work in the city of Lviv, where he graduated from the Faculty of History of the Pedagogical Institute by correspondence. Since 1951, he lived in Moscow and worked in the Ministry of Geology of the USSR. He also proved himself as a talented journalist. His publications about the war and its participants, ecology, discoveries and developments in the bowels of the earth, as well as other topics found a lively response from readers of all-Union and national publications.
He died on May 14, 1992. He was buried in Karlo-Libknechtovsk, Donetsk region.
The material is published, based on the book published in RIO Bolashak Baspa and on materials of the Internet.
Heroes of Karaganda [Text]: a collection of biographical information / edited by Zh. S. Akylbaev, A. A. Abdakimov, N. O. Dulatbekov, R. K. Omarbekova. – Karaganda: Bolashak-Baspa, 2000. – – 146 p. On September 8, 2020, an online seminar dedicated to the Day of Languages of the People of Kazakhstan and the birthday of […] 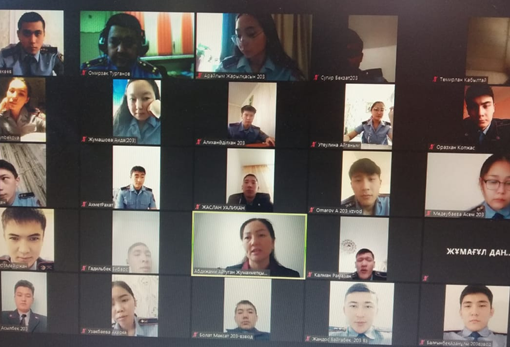