On April 27, Chairman of the Central Election Commission of the Republic of Kazakhstan Nurlan Abdirov held a big meeting with public activists, mass media and students of universities of Karaganda region at Karaganda University named after Academician E. Buketov. More than 300 people attended the event.

Chairman of the Central Election Commission explained in detail the initiatives of the Head of State Kassym-Jomart Tokayev to modernize the electoral process, announced in the Address to the Nation of Kazakhstan. The audience supported the proposed innovations and expressed the opinion that during the development of the draft Constitutional Law on Elections the representatives of the profile non-governmental organisations should be included in the working group. At the same time the participants of the meeting expressed the opinion that for certain categories of voters the traditional form of voting with paper ballots should be retained. On the part of the public, other proposals for improving the electoral system were put forward as well.

At the end of the meeting Nurlan Mazhitovich presented Abilzhanov Adilet and Kozhakhmetov Marlen with the book “History of Elections in Kazakhstan” published by the Central Election Commission.

SESSION 7. “MODERNIZATION OF THE LEGAL SYSTEM OF THE REPUBLIC OF KAZAKHSTAN: PROBLEMS OF THEORY AND PRACTICE”.This year, taking into account the […]

The final conference on the practice of the Department of Pre-school and Primary Education was held in the on-line mode.Students of groups […]

From June 29 to July 12, 2018, the State Gulag History Museum and the Memory Foundation, as part of international cooperation, filmed […] 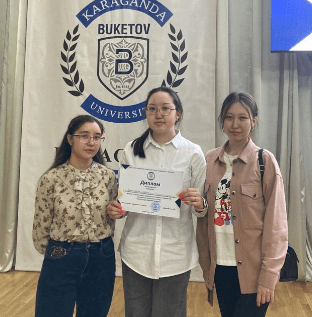 On the 5th of April in E. A. Buketov Karaganda University was held Republican intellectual game in format “Brain-ring” among higher educational […]