On March 17, 2022 within the walls of the Academy was held a meeting with announcing the results and the winners of the Regional Essay Competition “Speak your mind” for 11th grade students of schools, lyceums, gymnasiums of Karaganda and Karaganda Region, organized and conducted by the Department of Foreign Languages and Intercultural Communication of PE “Academy “Bolashaq” together with the Department of Education of Karaganda Region.
The aim of the essay contest was to popularize foreign language learning among high school students, development of their foreign language communication and linguocultural competence, writing etiquette, as well as encouraging them to express their views and ideas on issues that concern them.
Such contests have the character of an annual event, interest in which grows from year to year, as evidenced by the increase in the number of contestants and the expansion of their geography. So this year’s event found a great response among students and teachers. It was attended by 94 schoolchildren of the cities of Karaganda, Zhezkazgan, Balkhash, Abai, Shakhtinsk, Saran as well as villages Osakarovka and Dolinka.

Competent jury, represented by experienced teachers of universities and schools of the city, carried out inspection and evaluation of works according to the requirements approved in the Regulations of the competition, namely:

Following the results of work of jury the following winners of competition were defined:

Winners, marked by diplomas of I, II and III degrees received certificates of winners for discount for the first year in PE “Academy “Bolashaq” at 100%, 50% and 25% according to the received points for competitive work.

Jury members also marked some other works which authors showed high level of English proficiency and well formed skills of essay writing. In spite of the fact that there were some discrepancies in the criteria of the contest works, the essays of these participants were also highly appreciated by the members of the jury. In this regard, it was considered to assign separate nominations to these contestants and give them a discount on tuition fees for the first year in the amount of 10%. The above mentioned fact did not contradict the Contest Regulations, where it is noted that the organizers and the jury can make a special decision concerning the encouragement of the contestants with the corresponding justification of this decision.

The nominees of the contest are:

At the meeting the organizing committee of the regional essay contest “Speak your mind” expressed sincere gratitude to the teachers for their guidance in preparing the work for the contest. The supervisors of the winners and nominees were awarded letters of gratitude.

In conclusion, it is worth noting that such contests have the character of an annual event, which is also aimed at strengthening the reputation of the Academy, building its positive image and attracting school students to study at the university. In this regard, the growing popularity of competitions held by the Academy, as well as the increasing number of contestants indicate increasing awareness of the Academy and its educational programs among graduate school students in the city and region.

We hope for further fruitful cooperation! 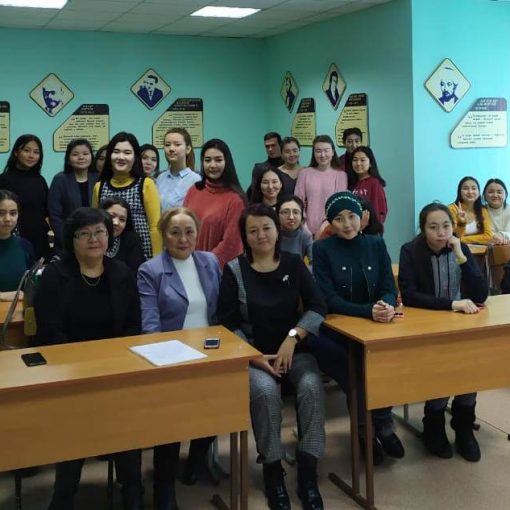 November 22, 2019 Center for Humane Pedagogy and the faculty of the Department of Pedagogy and Psychology invited doctors of pedagogical sciences, […]

On December 4, 2020, SIC Rukhaniyat together with A.B. Kosmanova, Senior Lecturer of the Department of General Education Disciplines, held a discussion […]

The Academy “Bolashaq” addressed to the rector, Professor K.N. Menlibayev received a review of the organization and the passing of the protection […]

Students of “Bolashaq” Academy, along with studying educational programs of future professional activity have excellent opportunities to realize their interests in various […]