The Ministry of Education and Science of the Republic of Kazakhstan is working to incorporate Kazakh language courses into advanced educational platforms.

Under the State program, effective programs for independent study of the Kazakh language by the population, such as, “Tilmedia.kz”, “Balatili.kz”, “Tilqural.kz”.

A feature of “Tilqural.kz” (the study of Kazakh language levels A1, A2, B1, B2, C1) is the availability and ability to download through the platform Android, iOS. In addition, electronic textbooks are available for downloading from the web-portal to your smartphone.

The project is designed by analogy with the Goethe Institute or the Pushkin Institute. The portal is available in 6 languages (Kazakh, English, French, German, Russian and Turkish).

In addition, the portals “Emle.kz”, “Sozdikqor.kz”, “Thermincom.kz” function for a wide audience, helping to enrich the vocabulary and improve knowledge of the Kazakh language.

Another important project is the “Subcorpus of Publicistic Texts of the National Corpus of the Kazakh Language” (hereinafter – the subcorpus).

The subcorpus is an informational and reference database of written and oral texts in electronic form. It displays the result of search in a natural context. The purpose of the corpus is to generalize language resources, normalize, systematize language, and present the results for public use.

The sources for the corpus of journalistic texts are the materials of the newspapers “Egemen Kazakhstan”, “Ana tili”, “Kazak

әdebieti”, “Zanim”, and “Түrkistan”. Accumulation of mass media materials on one base makes them convenient and available for use in theoretical and applied researches, compilation of dictionaries and language teaching.

With the help of the subcorpus, anyone has the opportunity to quickly and efficiently check the peculiarities of the use of an unfamiliar word or grammatical form.

“Tilalemi.kz” is a portal with news in the field of language policy implementation, articles of language scholars, regulations of republican competitions, events, etc. Also available on the portal are books, multimedia programs, dictionaries and magazines, etc.

“Abai.institute”.On November 18, 2020 in Nur-Sultan was presented the web portal “Abai.institute”, developed under the program of training and promotion of the Kazakh language in Kazakhstan and abroad. This is a unique project popularizing the Kazakh language, literature and culture, allowing citizens of our country, the Kazakh diaspora abroad and foreign citizens to study the Kazakh language. The “Abay Institute” is also available in a mobile application, which is supported by Android and iOS. The project is designed by analogy with the Goethe Institute or the Pushkin Institute.

The portal is available in 6 languages (English, German, French, Russian, Turkish, and Persian).

Also for the Kazakh diaspora in Russia, Turkey, France, Germany, Belgium, Iran, and Mongolia were held courses in the Kazakh language.

In 2021 courses for teachers of the Kazakh language from the USA, Russia, Turkey, France, Germany, Belgium, Iran, Mongolia, and Uzbekistan were held within the framework of this project.

A special role in the project is played by the NAO “Otandastar Fund”, which organizes work with compatriots abroad and ensures the smooth operation of Kazakh language rooms in the above countries.

The portal is available in a mobile application, which is supported by Android and iOS.

“Tilqural.kz” is a web service for step-by-step learning of the state language. The site has an online course that allows adults who do not speak Kazakh to learn the language at levels A1, A2, B1, B2, C1. After registration, the user is tested to determine their level of proficiency in the Kazakh language. According to the test results the system offers a training course (one of 5 levels).

The site allows you to improve your vocabulary, understand the meaning of new words and use them in everyday life, read fluently, express your thoughts both orally and in written form, pronounce words correctly, compose sentences correctly.

The user can view statistics on the completed lessons in the personal cabinet.

The service is available for downloading through Android and iOS platforms.

– “Tilmedia.kz” – a trilingual site interestingly and effectively teaching the state language to Russian-English speaking citizens was presented in 2017.

The work of the site is aimed at promoting the state, Russian and English languages, expanding the scope and methodology of their application. The language teaching methodology is based on audio and video content.

“Balatili.kz” – the site is designed for children over three years old, as well as for teachers and parents who are involved in the upbringing and education of children. The site works on the basis of an online platform with an intuitive search engine and easy navigation system.

The site contains worksheets for individual work of the child, methodological sheets for teachers, educators and parents.

There are materials for studying grammar and spelling, including an interactive alphabet and games, age-appropriate audio dictations, exercises and applications for developing calligraphic skills.

According to the age range of the children, literary texts for reading are grouped together, including interesting stories, thematic poems, mockery, riddles and proverbs.

Articles and research papers by experts on linguistic problems are published, as well as handbooks and lesson plans for kindergarten and elementary school teachers.

“Emle.kz” – the site was created in order to improve the linguistic culture of the population, increase the level of spelling. The database contains the current approved orthographic dictionary of the Kazakh language, spelling rules, scientific literature related to this area. The block “Norms of Literary Language” of the site presents words, their meanings, rules and principles of application in fiction and everyday life. The Orthography block presents the rules of spelling. It also describes the peculiarities of writing borrowed words and terms, their use in the past and present. The block “Punctuation” contains rules related to the order of punctuation marks. The Abbreviations block contains abbreviated words, their full names, the order of abbreviations, and the rules and regularities that should be relied upon when abbreviating names and words. The “Articles” block contains scientific articles by scientists in this field. The reader has an opportunity to contact the author and get an answer by leaving comments under the article.

“Termincom.kz” – the site is created for the purpose of continuous introduction into the unified electronic base of terms approved by the Terminological Commission under the Government of the Republic of Kazakhstan, unification and improvement of inter-branch terminological fund in modern science, education, technology and economy, public and social directions.

In the block “Discussion” the reader can leave his opinion about the terms proposed for approval.

In the block “Scientific and methodological bases” the works concerning the issues of terminology formation are presented.

“Sozdikqor.kz” is the first universal platform that allows to get acquainted with words and stable word combinations in various branch dictionaries and encyclopedias, with obsolete Kazakh words, borrowings, meaning of new technological words at the stage of development of information technologies.

Using the portal’s search engine, one can find out the definition of words, synonyms, antonyms, homonyms, occurrence in the phraseological combination of words.

Synonymizer function was added in 2021. It is being tested now. There is a function of keyword voicing.

The mobile application of the portal can be downloaded from Goolge Play and App Store. Functions telegram bot @Sozdikqor.kz.

“Qujat.kz” is an electronic base with samples of documents and instructions on competent drafting of documents in Kazakh and Russian languages.

The site is divided into 2 folders: “office” and “personnel” documents, where separate samples of documents are presented.

Totally there are more than two hundred samples of documents in the base (in Kazakh and Russian languages) which are available in PDF and DOC versions.

There is a service for making changes to document templates online.

– “Qazlatyn.kz” (portal and converter) is the main national portal accompanying the process of transition of Kazakh language to Latin alphabet.

Multifunctional converter of the portal allows you to convert texts from Cyrillic to the Latin alphabet and the Arabic script (Tote Zhazu). The internal core (codes) of converter is placed on the world web-service (Yandex-translator). Currently, the Kazakh language is included in the international languages with the name “Kazakh (Latin alphabet).

“Atau.kz” – Site in the field of onomastics.

There is also a full list of names of lands and reservoirs in the Republic of Kazakhstan.

Users can find rules on naming objects, normative legal documents on onomastics, information on national and regional onomastic commissions, a list of literature and research works on onomasticism.

“Qazcorpora.kz” is a subcorpus of publicist texts of the National Corpus of the Kazakh language, one of the projects implemented under the national project “Ұlttyk rukhani zhangyru”.

The corpus is an information and reference system based on the electronic accumulation of texts in a particular language. The main purpose of the corpus is the collection of natural language resources, normalization and systematization of the language, providing the results to a wide consumer for their rational use.

The National Corpus is not only the base of all language materials of the Kazakh language integrated into the system, but also a mechanism for expanding the functioning, semantic space of the state language in the virtual space, increasing informational distribution, mass access to language resources. This information and reference open system, reflecting the base of texts in the Kazakh language in the form of a digitized system, accumulates and provides the consumer with all kinds of literary language styles, linguistic applications at a certain stage (or stages) of existence of the national language.

The head of the project is N.N. Aitova, candidate of philological sciences, associate professor, and M. Bakhytkyzy, technical support supervisor. Scientists-philologists, industry experts from the following domestic universities and scientific organizations took part in the project:

– A. Baitursynov Institute of Linguistics;

Most of the main languages of the world have their own national corpora, which differ from each other in completeness and the level of scientific processing of texts.

The corpus recognized by the modern world languages is the “British National Corpus” (BNC), on which many other modern corpora are based. The Czech National Corpus, established at Charles University in Prague, also occupies a special place; the Russian National Corpus is also developing dynamically.

The possibilities of the National Corpus:

– Is necessary for teaching a language as a native or foreign language (worldwide textbooks and curricula are now corpus-oriented. Any foreigner, pupil, teacher, journalist, editor or writer, using the corpus, can quickly and efficiently check the peculiarities of the use of an unfamiliar word or grammatical form);

– is necessary for scientific study of the vocabulary and grammar of a language and the changes that have occurred in it over hundreds of years;

– simplifies the analysis and processing of extensive materials and obtaining statistical data;

– necessary dictionaries can be compiled on the basis of the corpus base;

– the corpus base is constantly being improved and replenished.

In the future it is envisaged to cover other internal genres of the journalistic style, as well as to expand by period of publication and expand by the names of sources. 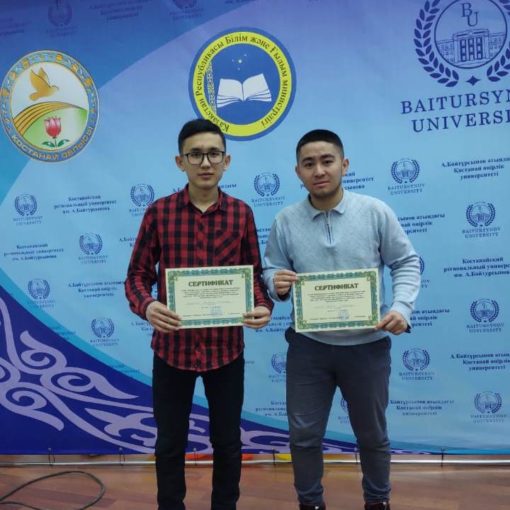 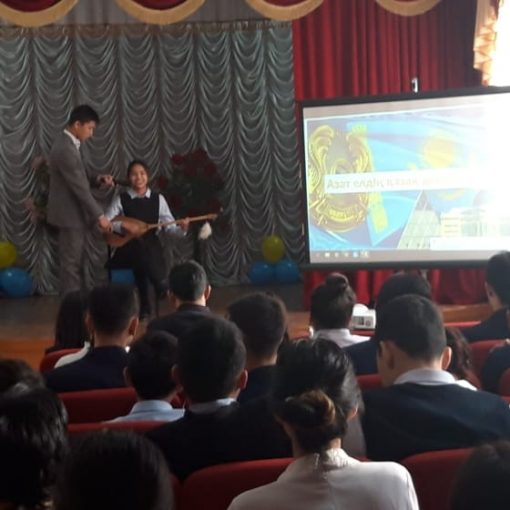 On December 12, 2019, teachers and students of Kazakh language and literature department of our academy “Bolashaq” held a concert program “Azat […]

On September 25, the newly elected Cabinet of Ministers of the Bolashaq Student Parliament of the Republic was solemnly presented with certificates […]