November 15 – Day of Kazakhstan national currency and professional holiday of the financial system of the country.

November 12, 1993 there was a decree of the President of the Republic of Kazakhstan “On introduction of national currency of the Republic of Kazakhstan”. That, by the way, also allowed the state to begin the formation of a full-fledged banking sector. November 15, 1993 tenge was put into circulation. Since then this day is considered the official Day of the national currency. Tenge turns 28 years old. Today tenge is an economic foundation of independence, a symbol of sovereignty, a full-fledged part of the recent history and future of Kazakhstan.

Why was the name tenge chosen?

The choice of the name of national currency caused many disputes: there were variants “altyn”, “aksha”, “tanga”. It was planned to name the Kazakhstani currency “som”, which is how the Soviet ruble was translated to Kazakh on the Soviet banknotes.

However, after Kyrgyzstan introduced the Kyrgyz som in 1993, another name, “tenge”, was accepted. This is the historical name of the medieval Turkic silver coins “dengue” or “tanga”. The name was suggested by academician Sauk Takezhanov. The hundredfold part was called “tiyn”.

The national currency has its own symbol (〒). The specified graphic image of tenge is the symbol of the ancient Turkic alphabet, denoting in the transcription the sound “t”, which begins the word “tenge”, as well as “Tengri”, that is the deity personifying the sky, which was sacred for all Turkic peoples. The symbol expresses the idea of stability of monetary unit, high potential, dynamics of development and growth of national economy of Kazakhstan (https://ru.sputnik.kz/spravka/20201115/15477652/den-tenge-27-let.html).

Department of Finance held a series of events dedicated to the National Currency Day.

At the seminar on 15th of November the students of the group F-21-1 made a presentation, dedicated to the Day of National Currency of the Republic of Kazakhstan:

On October 25, 2019 Professor Gareth Dyke held an online seminar “Basics of Peer Review: A Student Perspective” for students of the […] 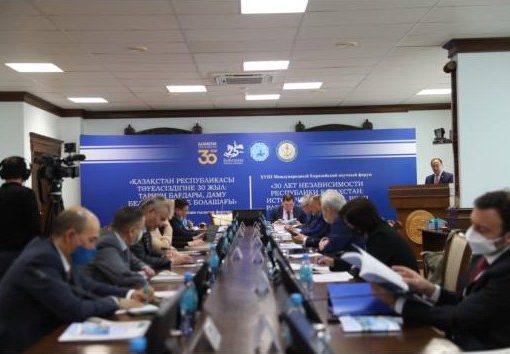 October 29, 2021 the Eurasian National University held an International Eurasian Scientific Forum “30 Years of Independence of the Republic of Kazakhstan”. […]