The article “Forgotten Heroes of Great War” by Nurlan Orynbasarovich Dulatbekov, Doctor of Law, Professor, Member of the Majilis of the Parliament of the Republic of Kazakhstan, published in “Kazakh Truth” on April 27, 2020, found a response on the pages of the national Internet portals.

As a result of the work carried out within the framework of the project “Forgotten Heroes”, created to search for and restore historical justice and on the eve of the celebration of the 75th anniversary of the Great Victory, the names of 133 Kazakh front-line soldiers who were presented to the title of Hero of the Soviet Union but were never awarded this deserved award were determined.
Nurlan Dulatbekov, the Majilisman, informed about it in his deputy inquiry, according to whom it is necessary to develop the complex plan of measures on immortalization of memory of undeservedly forgotten heroes – to publish books, to make documentary films about them, to establish monuments, memorial plates in villages, in native places of heroes, and also to renew search expeditions. And even if there is not much left until the 75th anniversary of the Great Victory, but to celebrate it at a decent level, it is necessary not only to begin now to actively prepare for it, but also in the future to continue the work to perpetuate the memory of the heroes, especially undeservedly forgotten.
What are we talking about?
About 500 Kazakhs were awarded the title of Hero of the Soviet Union for their heroic deeds in the war. However, not all the heroes were immediately appreciated, and some were forgotten. Thus, after the end of the war the title of Hero of the Soviet Union was awarded in 1946 to Kudaibergen Suraganov, in 1965 to Sabyr Rakhimov, and only in 1990 to Bauyrzhan Momyshuly.
In addition, eight Kazakhstanis were twice awarded the title of Hero of the Soviet Union. But if two of them – captains Sagadat Nurmagambetov and Seitkhan Temirbayev – received the title at least once, the others were both rejected. They are Private Kudaibergen Dzhancerikov and Staff Sergeant Mnaykul Sagindykov, Lieutenant Kabysh Kuktaev, Sergeant Zeytyn Bayzhanov, on whose account 248 killed fascists, as well as Major V.A. Gutov and Lieutenant V.I. Gutovsky.
Major Alexander Nesmiyanov from Zyryansk city of East Kazakhstan region was three times presented to the rank of Hero of the Soviet Union. And three times he was refused.
Or, for example, senior sergeant Abdybekov Tuleugali of the Guards, who destroyed 397 fascists with his sniper rifle, the program on All-Union radio was devoted to his fighting achievements, but on February 23, 1944 he died from wounds. And he was forgotten. One more sniper Abdukalik Kabdulov exterminated 215 fascists, but unfortunately, on July 21, 1944 he was killed. And nobody remembered about the fact that they were going to give him a high rank later.
The legendary pilot Baitursun Eserkepov made 174 successful combat missions from July 1941 to May 1945. But who knows about it today in Kazakhstan?
The tankers also distinguished themselves. Senior Lieutenant Zhumash Rakhmetov especially proved himself to the Guards, on the combat account of which four destroyed German tanks, 15 guns of different calibers, 36 Zots, 19 machine guns and about 300 German soldiers and officers.
All the listed soldiers were presented for the title of Hero of the Soviet Union, but for one reason or another they were not awarded and the high title was denied to them all.Such a list is endless, because all of the above are only part of the underestimated heroes, only the frontline soldiers found in the list of award lists – complains deputy Dulatbekov.
Indeed, few people know the names of these and other heroes like them, except perhaps their relatives. “However, they are worthy that the memory of them is not forgotten,” believes the Majilissman, and it is difficult to disagree with him.

The administration and staff of general education school №134 of the October district of Karaganda expresses gratitude to Maira Balievna Shashchanova, candidate […]

On October 25, 2019 Professor Gareth Dyke held an online seminar “Basics of Peer Review: A Student Perspective” for students of the […] 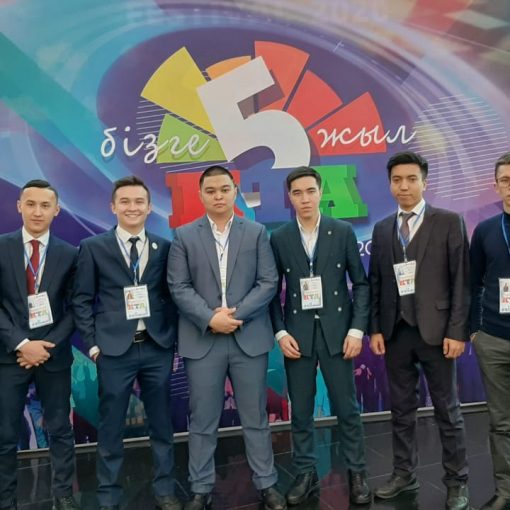 From 10 to 14 February, 2020, the annual, already traditional republican festival ‘Konildi Tapqyrlar Alany’ (Club of the Funny and Inventive) was […]